This is the first of several posts on my a-w-e-s-o-m-e vacation to Spain and France. It’s no wonder that my upcoming novel is called, “Flamenco & the Sitting Cat”!

Barcelona is wonderful off-season. In October, the weather was mild and the densely populated ancient city offered my husband and me a great start to a Spain/France adventure. We arrived a Friday evening, bleary-eyed from an overnight flight. Once at our rented room in a centuries-old flat, we stepped outdoors for a quick unexpectedly gourmet dinner. Upon return, we tumbled into bed where stupor overtook us. Fourteen hours later, we woke at two the next afternoon. Our self-imposed itinerary, not to mention our equilibriums, was already thrown off kilter. After sandwiches across the street, we set off for Barri Gòtic, (the Gothic Quarter).

The Plaça de Catalunya (Catalonia Square) was the first of the gorgeous sites we enjoyed over the next few days. Barcelona is part of the larger community of Catalonia. At the square, an unfinished upside-down staircase towers over a bust of Catalunya’s first president, Francesc Maciá, representing Catalonia’s ongoing history. The monument was designed by artist Josep Maria Surbirachs.

The Basilica of the Sagrada Familia is an eye-popping church still under construction since it began in 1835, scheduled for completion in 2028. Cranes continue to erect the innovative structure, its spires akin to the most amazingly intricate candle on the verge of melting heavenward back to the fantastical spirit world from whence it came.

The cultural and economic arguments for and against Catalunya becoming independent from Spain are beyond the scope of this post. The weekend before we visited, a rally for succession ended in police brutality. Many worried that a subsequent pro-Spain rally scheduled for the Sunday when we were there might end badly too. Fortunately for everyone, the gathering was peaceful and we enjoyed a walk along the La Rambla neighborhood.

Throughout Barcelona, art reigns supreme, from the Museu Picasso (Picasso Art Museum) to architect Antonio Gaudi’s many buildings, to street art including this music/graffiti/skateboard park.

Our vacation started with a highlight: reconnecting with a cousin I hadn’t seen in far too long and meeting her lovely husband.

After they guided us through the vicinity of the Barcelona Cathedral, they drove us up Montjuic for a delicious meal and an impressive aerial view of the city. 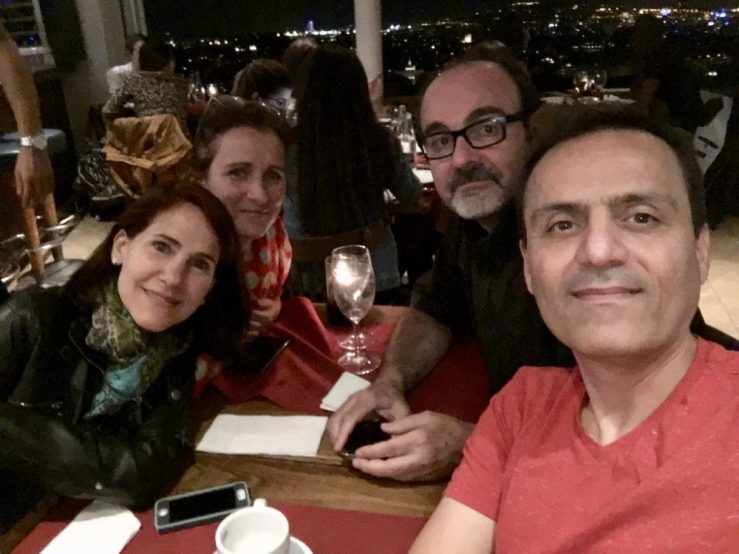 The following morning, we woke refreshed. We rented a car and let the GPS lead us to Basque Country, which lies half in Spain and half in France.

From Barcelona, we drove through wonderful Huesca, pretty Saint-Jean-Pied-de-Port, and enchanting Espelette. We were headed further into phenomenal French Basque Country (Saint-Jean-de-Luz, Bayonne, and Biarritz), then to experience the food and seaside dogs of San Sebastián, Spain, and to breathtaking Bilbao…